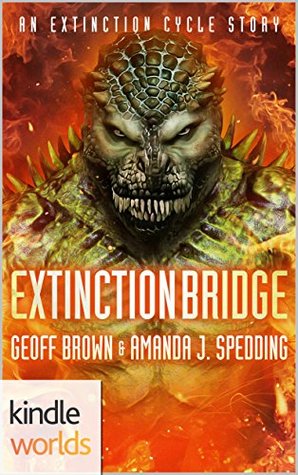 I don’t mind a bit of military sci-fi now and then and especially in the short story or novella form; it doesn’t take up too much of my reading time to blast through. Extinction Bridge is set in Sydney, Australia, where the city (and the world) has been overrun by mutant reptiles! A team of soldiers are sent into the harbour city to retrieve a possible weapon. The odds are stacked heavily against them as there are thousands of rampant mutants running amok in the area! The Grim Reader had to saddle-up, lock-and-load then ‘Git to da choppa!’

I’ve been gaming quite a bit recently and this novella reads like a video game. Tough-talking soldiers with big biceps, big guns and big mouths go in hot, blasting their way through the enemy horde on their way from the Botanic Garden to famous landmark the Sydney Opera House. Heads are reduced to red mist, limbs are severed and it’s truly breathless stuff. As is often the case with military sci-fi, there is much talk of weapons, a little bit too much sometimes, especially for a casual reader of this genre such as me. I have no idea of what the difference is between an M203 and an M4, and to be honest, I don’t care, but for fans of this type of story, hardware specs are a must I guess.

Extinction Bridge is an absolute riot! If you want action then there is more packed into this short novella than there is in the whole trilogy of The Expendables movies! Brown and Spedding drop you straight into an extremely hostile environment and from then on it is bang, bang, bang, right up until the final scene on the Sydney Harbour Bridge where the surviving soldiers engage in an epic last stand against the River King!! It’s pretty damn exciting, too! The Australian setting is a welcome change. The characters are all typically macho, but the fun is turned up to 11 and at around 1 hours reading you will get no complaints from this reader.

I haven’t read the Extinction Cycle books by Nicholas Sansbury Smith. Most of them clock in at over 300 pages and I’m not sure I could take that much weapon chat and the associated grunt talk. However, for me these novellas are a very cool way to kill an hour. Fun, fast and furious. Highly recommended to those who enjoy the series and military sci-fi fans.

4/5 armour-piercing rounds from the Grim Reader.