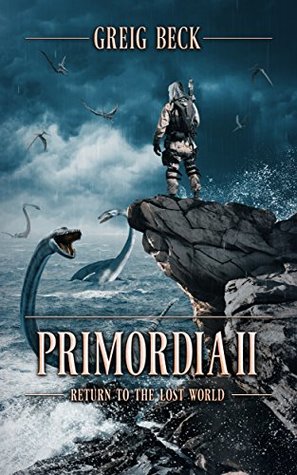 I had a ball with Greig Beck’s first Primordia book and was super keen to get a hold of this sequel. The wait for this hasn’t been long and so I remembered everything from the first novel. Readers here should be well aware I have a great love of dinosaur books and Greig Beck is a master storyteller when it comes to the action thriller!

In many ways, Primordia II is what Aliens is to Alien. The action is bigger, the dinosaurs are bigger, Hell, even the bugs are bigger! This book follows on from the last but it’s written in a way that you don’t necessarily need to have read the first one to get the gist of what is happening. But what exactly is happening? Well, It’s time for Emma to go back to the Amazon to rescue Ben Cartwright! Last time, she barely made it out after being relentlessly pursued by a host of prehistoric horrors that included the immense and terrifying Titanoboa! This time she is taking every precaution by bringing in a team of special forces bros (old friends of Cartwrights). Big muscles, big mouths and big attitudes are front and centre, this team certainly are a colourful bunch. The marines are packing some serious heat, and they’re going to need it as this journey sees them tee-off against some of the deadliest prehistoric creatures Greig Beck could think to resurrect! As soon as they crash it’s balls-to-the-wall action all the way.

I loved this book. Beck’s writing style is smooth, the action is fast-paced and the characters are quirky. I liked the flips between different narratives as we followed Emma’s recruitment and organisation for the journey back to the Amazon and Cartwright’s survival against seemingly insurmountable odds. There are even more horrors to be found in the jungle and ocean this time, I simply couldn’t get enough!

It isn’t often I enjoy the second book in a series as much as the first, but with Primordia II, I will make an exception. Those looking for a prehistoric action-adventure story won’t find much better. Beck knows how to keep you turning the pages long into the night. Count me in for book 3 if there is one.

5/5 Pteranodons from the Grim Reader.