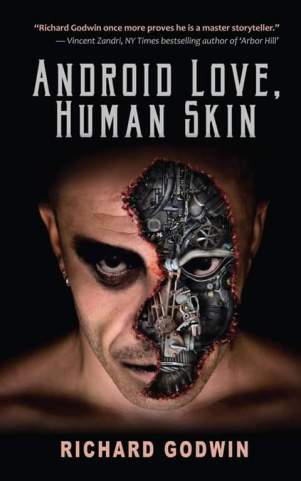 Today I have an excerpt from the latest novel by Richard Godwin called Android Love, Human Skin. I always enjoy posting excerpts as I fell it’s a great way to whet the appetite and alert people to new voices within the wonderful world of fiction. I hope you enjoy!

Breakdown. All the bodies in piles. A mountain of bones. The roads like bones beneath the wheels of the armoured trucks that fetched them away.

The army opened fire, removed press intrusion. A few men and women escaped the annihilation of their skins, were taken to the hospital where they were building the machines, readying them for the future state. They worked on them. They built a world of skin, a beautiful world of beautiful bodies.

The old society was decayed. Men and women sexually alienated through the unreal world of virtual lives lost in the engineered fantasy. Sexual pleasure derived from electrical signals. They plugged themselves into the orgasm generator, addicts to the thrill, empty bodies and empty minds, the children of machines. Riding the pleasure wave.

Population wipe out in the empty city. Information access denied now. The government was ready. The science was already well advanced. Their victory howled along the empty streets like a midnight song only vagrants could hear. But there were no vagrants in the place of endings, only the bodies they needed to build their state from the flesh and bones, from the peeled world, where they’d removed the thing they wanted most, that human thing that defined the body of man and woman. This was more than sex. This was more than Eros and his hectic fever, a design on the living by voyeurs.

Inside out man and woman, like an inverted glove, bodies like bleeding gums or diseased genitals. Ugly world. They took them away. They built the citadel while the survivors slept in the hospital, while their doctors worked on their bodies and the other bodies they were preparing.

The government retreated beneath the screen. Became the watchful observers of human pleasures.

A single tree blew in the wind, the last fallout of the weapon, a poisoned air that smelt of charred meat, then it was gone, no leaves or branches, just a stump somewhere in the mind, existing in memory, a place far away from the recreated world ready for the humans with skin. What world without beauty is worth governing?

Food shortage. It had existed for years. They lied. They did what they do. They dwelt in the poisoned food chain, weakness dominated mankind, bones became brittle, body parts atrophied. It caused the war. They fought for plants that had no future, not after the first chemicals.

War and economics worked hard to starve them. And they’d run out of space and time. They were feverish in dishonesty. Insane reasoning.

Nutrient skins. The breakthrough. The government’s way out. They manufactured films with different nutritional properties inside. Men and women sustained by skins. Men and women with bodies. With bodies that had skins. Intact skins. Beautiful world. From epidermis to hypodermis, all the way down to bone and muscle, they were human again.

They needed an angle and they got it. Pleasure. In a world of minimal food, pleasure was needed. The body became gold. The body gave pleasure. Economically it ran the state. To please the body and control desire. The undeclared manifesto was structure gender to cancel dissent. But in a world of communication breakdown men and women had to be introduced to one another again.

The reduced population needed to be enlarged. The government-controlled sex. But no one was breeding anymore. Technologised man and woman loved machines. The eternal mismatch had lost its spark. Their bodies no longer interested in the sexual dance. The arguments worn, faded like a once angry bruise.

It took more than food to build the citadel and house the population in its sterile enclosure. It took a world of human skin dancing with electric desire. 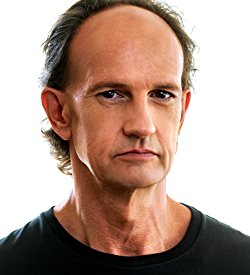 A dystopian science fiction novel that explores the nature of gender and sexual conflict and the addiction to pleasure in a virtual world.

Welcome to the four genders in a future with no planned conflict, a utopia of pleasure engineered by the union.

Society has been revolutionised by gender control and the technologization of man and woman. In a future where a biochemical weapon has removed the skins of the population, the rulers hunt for the beautiful ones, those men and women who still have skins. The union is the new government, a faceless body of politicians who were behind the order to use the weapon that backfired on them, leaving them skinless.

In the glass citadel, the new utopia, where the only surviving humans with skin are placed, they recreate the world of gender by offering humans four types of robot with which to have relationships. All the humans are placed in relationships with machines, apart from Gerald, who appears to be a spy for the union and is filming the humans, and Elliott, a robot programmer. The union watches it all, political voyeurs in a totalitarian state of enforced sexual ecstasies. Food has been replaced by nutrient skins, and flavours can be chosen.

Traditional man, who has values that fall within the norms of the old society, heterosexual

Questioning man, who has been programmed to quash his own desires, sexually ambiguous

Revolutionary woman, who has broken free of conditioning, lesbian

The four machines they are coupled within a social engineering programme are:

Androgyne, neuter, bearing both genders, paired with the Revolutionary woman

Biodyne, a crossover, alternating between male and female, paired with Questioning man

In a world of pleasure what can go wrong? Gender conflicts soon arise among the humans. And the robots appear too interested in their skin. It seems the union is planning to harvest human skin for themselves from human relations with the robots. But things start to go awry and the programme breaks down. The humans become addicted to the robots, and two of the robots, Hank, an android, and Viola, a biodyne, begin a love affair, something never anticipated in a social programme anticipating only sexual pleasure and need. Then the humans start to meet and talk and have relationships with one another, and the machines start to have sex with one another. When Viola falls pregnant she and Hank escape the citadel and discover the mutants on the outside and the lies of the union. But the union send the hunters after them and the sex police to the humans to ensure compliance.