Insurrection are a heavy proposition indeed. With elements of thrash and death metal, the bands sonic assault is an absolute delight to the ears. Check out the video for the track Prototype below and catch the band live on the dates below. The album, Extraction, will be released through Galy Records on October 6th. I’m in…\m/

Assembled in 2003 to infiltrate, build and destroy, Gatineau, QC’s INSURRECTION is an aural onslaught assaulting witnesses in both languages of French and English. Known for blending calculated technicality with a signature mixture of merciless death metal, the band has emerged to be one of the most prominent Eastern Canadian metal bands.

Annihilating the masses with their three previous full lengths “Prototype” (2013), “Fracture” (2010) and “Prologue” (2009), INSURRECTION is ready to once again push their metal to blasphemous levels with their next release “Extraction”. A ten track aberration, ready to shock and blast fans to the next life. The album is produced by Pierre Rémillard at Wild Studio (Cryptopsy, Obliveon, Anonymus, Voivod, Krisiun, Ghoulunatics, Despised Icon, Beneath the Massacre, Gorguts, Martyr, etc) and features guest vocals from Bruno Bernier (Obliveon) on “Data Extracted … End Transmission”. Slated for release on October 6, 2017 via Galy Records, the band is revealing to fans the artwork and track listing.

In addition to the release of their fourth album, INSURRECTION will be spreading the notoriety of their live shows across areas of Quebec, Ontario and New Brunswick in promotion of “Extraction” (dates listed below).

“I think I speak for the others guys in the band when I say all this news is more than exciting. This tour we’re embarking on is all about meeting up with the fans who supported us in the past and present. We’ve been working on ‘Extraction’ for quite some time and we know ‎fans will have as much fun listening to it as we will playing it live for everyone!” 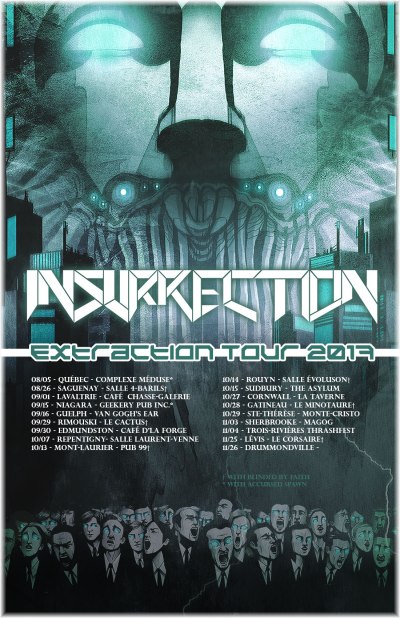