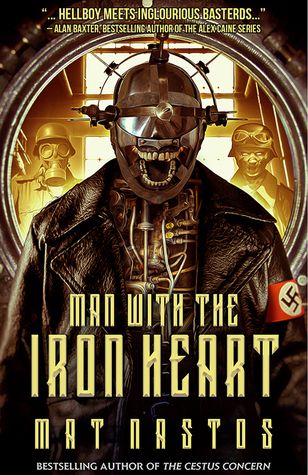 Sometimes you see a book cover and you simply say “Oh yes! It will be mine!”, such was the case with Man With The Iron Heart by Mat Nastos and published by Cohesion Press. This is one of those books where you barely get to draw a breathe before the next action-packed scene explodes inside of your mind. Nastos’ tale of Nazis meddling with powers way beyond their control, and a small group of brave soldiers led by the fearless MacAndrew and white-skinned god, Donner Grimm, is a balls-to-the-wall blockbuster just waiting to be made into a movie.

Man With The Iron Heart pulls you in during the first couple of pages and drags you along mercilessly as our small group of soldiers embark upon a quest to rid the world of the evil Reinhart Heydrich-a man who has committed unspeakable evil under the guidance of Hitler. What begins as a seemingly routine ambush soon turns into a fight for survival as MacAndrew and his band of brothers are close to being beaten when a mysterious and godly presence steps in to help. what follows is a race against time, other worldly creatures, Necrogolems and oh so much more!

The main characters, Donner Grimm and MacAndrew are just great, they form a terrific brotherly bond, becoming a sort of Batman and Robin team. I wanted to know more about Grimm’s history straight away and Nastos tells his story mid way through the book. It adds a real emotional element to the carnage when you discover why it is he is fighting and what he carries with him. As for the Nazis, well, they are suitably bad bunch as you can imagine: ruthless, uncaring, evil and selfish, and I love it when Grimm despatches of them with extreme prejudice. The dialogue is witty and overall I have no real complaints, although perhaps it was over a little too quickly. I wanted MORE, damn it!

I think Cohesion Press has a real winner on their hands here. Man With The Iron Heart should really appeal to all fans of speculative fiction. It’s got elements of action, horror, science fiction, steampunk, fantasy, I also think comic book readers will enjoy the break-neck pacing of this book. I seriously can’t wait for the next book. The foundations for a strong series have been set in stone and I look forward to following Grimm and MacAndrew to Valhalla and beyond.

5/5 runes from The Grim Reader.