The truth is out there…and, for Brian Fatah Steele, it was time to break out his favourite X-Files episodes then get stuck into the writing of ‘There is Darkness in Every Room’. And let me tell you, fans of the show will love this book. Weird aliens, black goo, flesh being flayed from the bodies of young college students, oh my! Things are getting strange, I’m starting to worry. This could be a case for Mulder and Scully!

Thankfully, there are no Mulder and Scully types in this novel. Instead we follow Tanner Kokinos-a young college student that has been repeatedly abducted by aliens for many years as she tries to unlock the secrets to her abductions and possibly the rhythms of the universe…(I made the rhythms of the universe bit up). A series of gruesome murders have sparked unrest amongst students at Berkshire College (though not quite as much unrest as you would think, considering the horiffic nature of the murders!) and as the story unfolds, the pieces of an alien puzzle, spanning galaxies and time come together in this gory novel that is a lot of fun to read. It turns out that humans are able to unlock the secrets of the stars and are able to ascend and become higher beings! This doesn’t sit well with the aliens who are concerned that humans will become the dominant interstellar species! So they keep a close eye on things…

‘There is Darkness in Every Room’ is a mish-mash of science fiction and horror. It is a fast paced, blood-filled ride with some pretty interesting ideas surrounding alien life and our own place in the universe. This book was a lot more icky than I thought it would be. When the darkness comes, flesh is flayed, bodies are turned inside out and eyes are removed to be replaced by black, gooey, space tendrils! It reads like one of the better X-Files episodes (and no, I’m not a fan of the show). The characters are pretty good, Tanner is quite likeable I thought and the helpful watcher, alien dude, Graham is also quite interesting.  The dialogue is bit clunky, but the novel has a real cool, sci-fi, B-movie feel to it that I like. There are some definite Lovecraft influences and although I have yet to see the movie, ‘The Void’, I can imagine fans of that will definitely want to check out this book. Just watching the trailer for that movie makes me think of this story.

If you want hard sci-fi then look elsewhere. But, If you want a pulpy, fun read with plenty of severed, liquified body parts and alien goo then ‘There is Darkness in Every Room’ is the book for you. I enjoyed it a lot, great weekend reading, top entertainment. 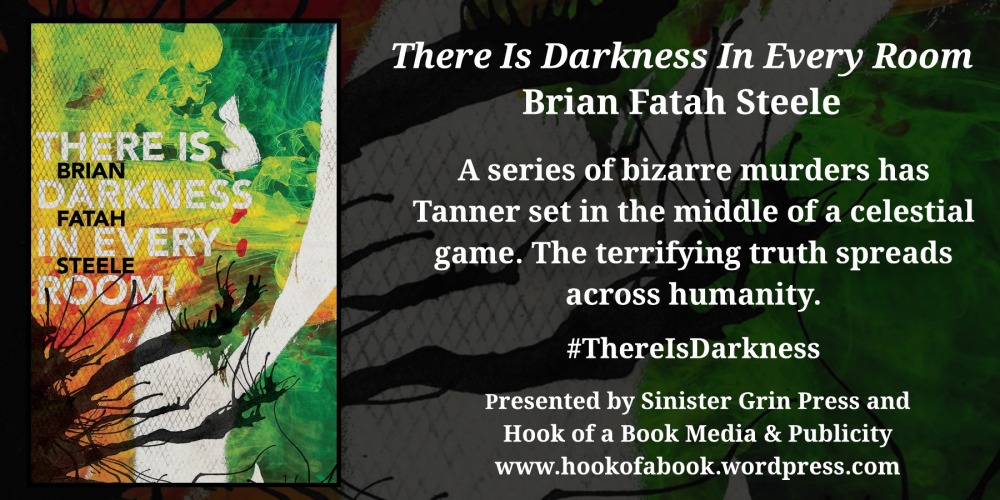 There Is Darkness In Every Room, Synopsis –

Even as a young woman, Tanner is haunted by childhood nightmares of alien abduction. She’s trying to find her place in college, but a series of bizarre murders on campus isn’t helping her paranoia. Tanner just desperately wants to be normal, but finds herself in the center of a celestial game, the players beyond comprehension. The terrifying truth spans across humanity, and there is no hope, there is no tomorrow. There is darkness in every room.

Brian Fatah Steele has been writing various types of dark fiction for over ten years, from horror to urban fantasy and science fiction. Growing up hooked on comic books and monster movies, his work gravitates towards anything imaginative and dynamic. Steele originally went to school for fine arts but finds himself far more fulfilled now by storytelling. His work has appeared in such places as 4POCALYPSE, BLOOD TYPE, DEATH’S REALM, IDOLATERS OF CTHULHU, PAYING THE FERRYMAN, CTHULHU LIES DREAMING, and the Bram Stoker Award-nominated DARK VISIONS, VOL.1. His own titles include the urban fantasy novel IN BLEED COUNTRY, the post-mythic novella collection FURTHER THAN FATE, and the dark sci-fi collection BRUTAL STARLIGHT. Steele lives in Ohio with a few cats and survives on a diet of coffee and cigarettes. He spends his time still dabbling in visual art, vowing to fix up his house, acting as a part-time chaos entity, spending too many hours watching television, and probably working on his next writing project. 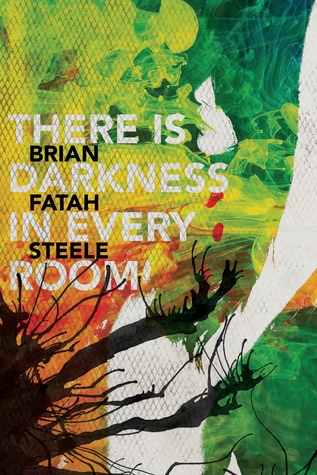 “So, here, we have a set of tales from Steele that run the gamut, from the terrible to the sublime. In all honesty, Steele rarely forays into the realm of sci-fi, finding his bliss mostly in fantasy and horror. However, in this array of stories he seems to be channeling Brin and Bloch, rather than Barker and McCammon.”
–CL Nicolas-Stegall on Brutal Starlight

Available on other online retailers as well such as Barnes and Noble, Kobo, etc! Order from your local indie bookstore or ask your library to carry.

If you’re a book blogger or media site and would like to feature Brian Fatah Steele or review There Is Darkness In Every Room, contact Erin Al-Mehairi, marketing/PR at Sinister Grin Press and Hook of a Book Media, at hookofabook@hotmail.com.