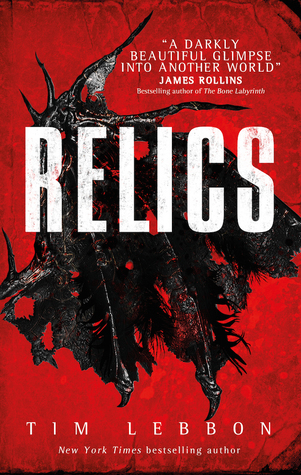 ‘Relics’ might just be my favourite Tim Lebbon novel yet! It is a book that has elements of crime, urban fantasy and even horror, and I strongly feel that ‘Relics’ is destined to become one of my favourite reads of 2017.

The two main characters are Angela and Vince. Angela and Vince are a loved-up couple living in central London. When Vince mysteriously disappears from work one day, Angela goes in search of him and in doing so she uncovers Vince’s “other life”. There is an underground black-market for strange relics, odd and extremely rare pieces of the past, a magical, unbelievable past. Are they real or purely a work of fiction? How long has Vince been a part of it? What else is he hiding from Angela? These are all questions that Lebbon throws at the reader early on. I won’t say anymore about what this book is about because it would spoil the surprise, but whilst ‘Relics’ may start out as a kind of crime thriller it soon takes off in a completely different direction, and one that this reader had a truly wonderful time with.

‘Relics’ is a real mash-up of genres, and it works brilliantly. At times I felt there were comparisons to Neil Gaiman’s ‘Neverwhere’, whilst elsewhere there were even hints of the classic ‘The Lion, the Witch and the Wardrobe’ by C. S. Lewis.

Angela is a great character; strong when she needs to be, but at times fragile and confused. Vince, too, is well fleshed out; a kind of Indiana Jones, but perhaps not quite as brave. The book is filled with other incredible characters as Angela and Vince enter a world of strange creatures and vile people. Some of these characters are painted in grey, in that you are never really sure whose side they are on, and after all, some of them have a lot of money invested in these relics! The dialogue is great, too. Some very quotable passages particularly from the “other” characters.

I went into ‘Relics’ not having read the synopsis. I loved the cover art and Tim very rarely disappoints. I devoured this book over three nights, always looking forward to re-entering the strange and magical world that Lebbon has created. I’m going to keep this review nice and short but I’d strongly suggest if you’re a fan of either of the books mentioned then I think you will adore this, but do as I did and try not to read any spoilers, for magic awaits!