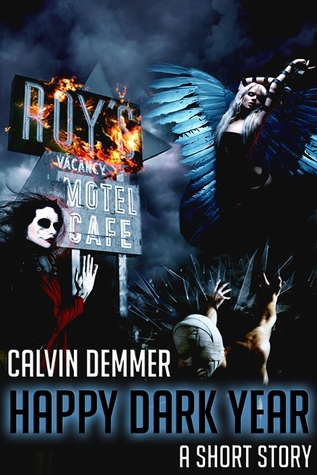 It says a lot about a writers work and the pride they have in it when they are prepared to get some kick-ass cover art for their book, even when it is only a short story. At around thirty minutes reading time each, ‘Three Dead Men’ and ‘Happy Dark Year’ are two quick slices of horror.

With ‘Happy Dark Year’ a young couple are on their way to a New Year’s party but constant bickering between the two leads to Cody dumping his girlfriend Kendall at a motel whilst he heads to the party to meet up with friends himself. Cody catches the eye of another girl at the party and soon things take an unexpected turn when they visit the lake for a spot of hanky-panky!!

I really enjoyed this one. It’s certainly a story that doesn’t end up where you think it will and for that I tip my hat to Calvin Demmer for a very cool ending. I felt it was a little harsh to dump Kendall at the motel but I suppose Cody gets what he deserves as a result of this. ‘Happy Dark Year’ is a quick read but very satisfying. I dig it.

‘Three Dead Men’ didn’t quite have the same punch as ‘Happy Dark Year’. Once again the cover art is very cool and perfectly reflects what the story is about. The story follows Maiko, as she goes to her uncle’s house one night to collect him for dinner. Her uncle is a collector of antiques and other historical items. Some of these items house an ancient evil that is unleashed, putting Maiko into a fight for survival!

There is nothing wrong with ‘Three Dead Men’ at all, it just didn’t blow me away and it didn’t quite have the same great ending of ‘Happy Dark Year’. I liked way the story was set up. It was creepy and the fact that the dead men weren’t simply vengeful spirits but instead were (spoiler) entombed within a (spoiler) was original. I think this one would work better inside an anthology or perhaps as a story in a collection. Not bad, but not brilliant either.

Overall, Calvin Demmer has shown that he has some original ideas and the obvious care taken with editing and presentation shows that he takes a great deal of pride in his work. I will certainly be reading more from this up and coming writer.

pick up a copy from Calvin’s Amazon page here.