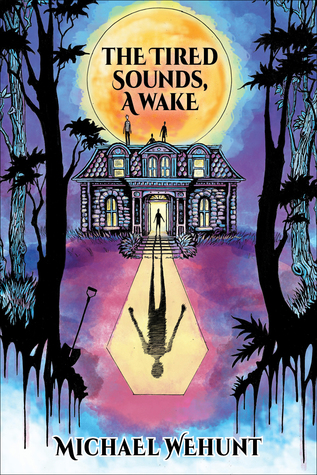 Michael Wehunt announced himself early last year with his sublime collection of weird, quiet horror ‘Greener Pastures’. For a debut collection it really is quite something. A gathering of strange stories that stretch the imagination whilst at the same time leaving you with a great sense of unease and disquiet.

With ‘The Tired Sounds, A Wake’, Wehunt stretches himself into novella territory with this limited release through Dim Shores. Whilst this novella isn’t quite as immediate as some of the stories that were featured in the collection, it does show a writer with a blossoming imagination and a great narrative voice. The novella centres around a married couple, Lorne and wife Gwen, rapidly approaching their wedding anniversary. The couple is becoming increasingly estranged, due in part to something that happened at Lorne’s work, something that is driving a wedge between them, creating an atmosphere and a continued detachment that is impossible to ignore. Lorne looks to do something a bit special for the anniversary by spending the day at an old house. The old house isn’t all it seems. In addition to this the couple receive a number of visits from a mime (I think this is a sort of metaphor for the silence that now exists between them), who leaves gifts behind whenever he moves on.

‘The Tired Sounds, A Wake’ is a slow-burner of a story. It is one that is rich in character and originality, thoughtful and well-written. Wehunt’s prose is quite beautiful and he captures the fragility of the relationship between the couple wonderfully well. There are his trademark moments of unease and a heavy atmosphere shrouds the book as you read. I really enjoyed how the books chapters switch between the two characters and the sombre tone overall. The ending is very good and works really well leaving you emotionally drained and wanting more from this talented writer of the weird.

‘The Tired Sounds, A Wake’ is available as a limited edition (200 only) novella and features some wonderful artwork from Justine Jones. Check out Dim Shores for other limited edition chapbooks.