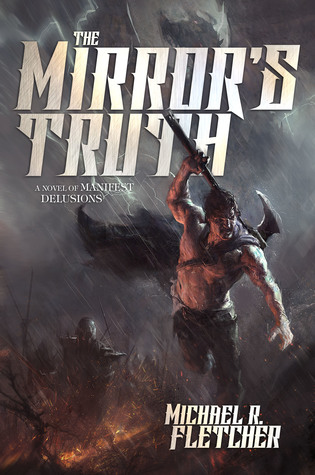 ‘The Mirror’s Truth’ is the second novel by Michael R. Fletcher and he once again thrusts us into the world he’s created where delusions are manifested and power corrupts. Fletcher’s ‘Beyond Redemption’ was a triumph of Grimdark storytelling. Morally ambiguous characters, blood and guts a plenty and no happy endings meant I was easily hooked on the story he had created and the world-building was superb. The magic system is unique and the possibilities are endless. A great time was certainly had by this reader.

‘The Mirror’s Truth’ is the next book and features most of the characters from the first book. We have the young godking Morgan, looking to rule over all of the land but worried about a certain mercenary (Grizzled old warrior, Bedeckt). Stehlen and Wichtig, Bedeckt’s two associates from the first book also return and are determined to hunt down Bedeckt after he abandoned them in the afterdeath. Meanwhile, Konig’s doppel has his own ideas over who should rule. From here on in the plot twists and turns, friendships are tested, new players join the fray and madness is everywhere. It’s Grimdark time!

I really enjoyed the return of Bedeckt, Stehlen and Wichtig. Their characters developed well as the story progressed, each one questioning their motives and their roles in things. There are some surprisingly touching moments, particularly towards the end of the book and this is a nice touch as I do like just a little bit of light in my Grimdark now and then. Of the newer characters, Zukunft (a mirrorist that can see the future) and Lebendig (strong female swordswoman and sometime lover of Stehlen), both have huge rolls to play and are well-drawn, integrating perfectly into the story. The Wahnist priest (Vornig) that follows along with the shape-shifter (Drache) and the Wahnist priestess (Edbehutter) are all superb, though a little under-used I felt. I kept wanting more from these three as their power and all-round craziness is truly addictive. Vornig, in particular, as he pulls the victims souls from their bodies Exorcist style! Fletcher shows great imagination here as he does with Erdbehutter – a priestess who is able to manipulate the earth on which they stand. It wouldn’t be fantasy without a dragon and Drache is death from above, seemingly unstoppable and stealing every scene it is in. The artwork is also stunning, much improved over the first book, I think.

I’d definitely recommend reading ‘Beyond Redemption’ first, otherwise you could get easily lost in who is who, what doppels are, what is a mirrorist etc, etc. ‘The Mirror’s Truth’ is a superb follow-up to one of my favourite books from last year. Despite there being a bit too much stage-setting early in the book and my personal feeling of the under-use of certain characters, ‘The Mirror’s Truth’ is an outstanding read and the ending is unforgettable. I’m looking forward to seeing where we go from here. Highly recommended reading. Bring on number 3!