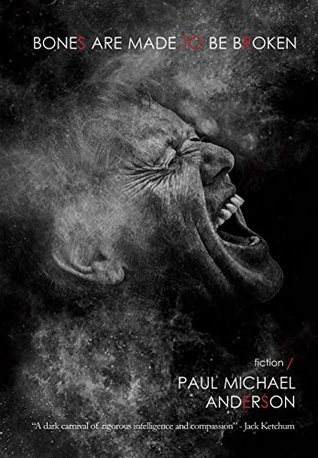 Every once in a while a book comes along that knocks you for six. In 2015, John F.D. Taff blew me away with his collection of short stories ‘The End in all Beginnings’ and in 2016, Paul Michael Anderson has done likewise with ‘Bone are made to be Broken’.

‘Bones are made to be Broken’ is the first collection of short stories from Paul Michael Anderson, released by Dark Regions Press. Paul’s work first came to my attention in 2015 with ‘ To Touch the Dead’ – a short story that was a standout in Grey Matter Press’ ‘Deaths Realm’ anthology. I went as far to say at the time that it was probably my favourite short story that year. In an anthology filled with great writers and great stories, ‘ To Touch the Dead’ was quite superb and really stood out. This fine tale is included here and I was more than happy to revisit it. There are a couple of other stories included in this hefty tome that I’ve also come across before but in testament to Paul’s quality writing I was just as keen to read them once again.

Anderson’s stories are carefully constructed think pieces with very human characters in sometimes unusual situations. It is often his characters that elevate the stories from being very good to great. He is not afraid to visit staple horror genre favourites in Vampires and other worldly Lovecraftian-style menace but still manages to keep them fresh and vibrant, something other storytellers fail to do.

‘Bones…’ is a huge book, but there is more than enough originality and emotion contained with the stories to keep the reader from becoming bored. Relationships play a big part in Anderson’s stories and none more so than personal favourite ‘Love Song for the Rejected’, a tale about Evie, and her unusual heart condition. I loved this story. It’s incredibly deep and thoughtful, much like many of the other tales on offer here, though I think it really resonated with me because I have a young daughter with the same name and I felt incredibly moved by this story. The book is filled with gems though the centrepiece is undoubtedly the novella and title story ‘Bones are made to be broken’, which sees Anderson stretch himself into novella territory and performing exceptionally well. The title story pulls together everything good that has come from the shorter stories before it in a tale that pushes all of the right buttons emotionally. To finish off the collection with ‘All that you can’t Leave Behind’ is quite clever. Not simply because of the title, but because it is probably one of Anderson’s more recent story releases that appeared in the excellent ‘Lost Signals’ anthology from Perpetual Motion Machine Publishing and it just seems like a great story to end on.

‘Bones are made to be Broken’ feels like a jigsaw puzzle, where every piece serves a purpose, the end result being an image of exquisite beauty. It isn’t often you come across a collection of short stories as dynamic and entertaining as these. Stories with depth, heart and soul, Anderson is a passionate writer that leaves nothing to chance in one of the most impressive short story collections of recent time.