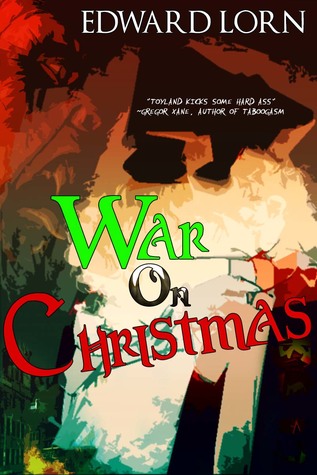 What better way to sign off Storytellers in 2016 than with a piece about Christmas. Today’s guest is Edward Lorn and he is declaring WAR ON CHRISTMAS! Edward is a writer I am only recently becoming familiar with. Residing mainly in the horror genre, Lorn’s short story collection ‘Others and Oddities’ is excellent reading, check out my review here. and I also recently read his short story collection of literary fiction titled ‘Word’, definitely not horror, but still a very good book. Check out my review of that here.

Right now you can fill up on Lorn ebooks, many of which are only 99c and some are even FREE!!!! I highly recommend that you do. Thanks, E for this entertaining piece and I hope you all have a great Christmas. For more on Edward Lorn see the bottom of this post. Enjoy. 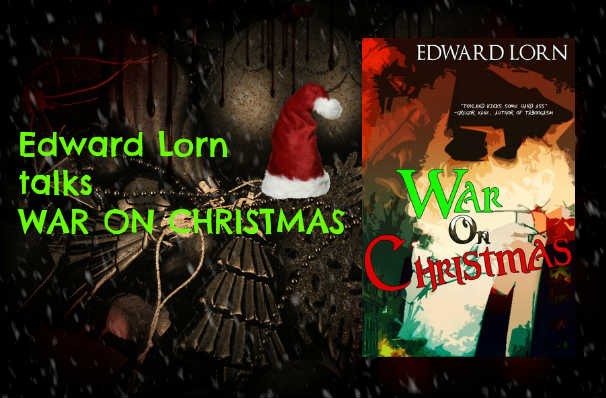 Hello, everybody. My name is Edward Lorn. I’m the author of Bay’s End and Cruelty, among other novels, novellas, and short story collections. Today, I want to talk about my inspiration behind my yearly free Christmas series, War on Christmas.

I’ve been writing since I was six year old and writing professionally since 2011. In 2014, I started making enough money off my work to write fulltime. As a thank you to fans, I wrote a short piece of fiction of about 2,000 words entitled The Naughty List and gave the story away for free just before Christmas. The freebie was so popular, it remains in the top five of my most-reviewed works on Goodreads.

While I do not respond to reviews, good or bad, I do try and read them all. Doing so gives me an idea of what works for readers and what doesn’t. So when people started chiming in about how they wanted more of my version of Santa and his universe, I decided to write a second story. Unfortunately, I could only afford to have one half of the tale edited the following year, in 2015, so I spilt the second story into two parts and called them Deck the Halls and Beyond the Gates of Toyland. As of today, the series is complete. The final story, Beyond the Gates of Toyland, should be live and free on Amazon right now. If you missed the first two, an omnibus containing all three stories will be available December 21, 2016.

What inspired me to write a story about a kickass Santa Claus and his battle-ready reindeer? Well, I’d become bored with horror authors perverting the idea of the jolly old elf. Every time you come across Santa in the horror genre he’s some psycho dressed in a red suit chopping people up with an axe, or he’s played my Goldberg and everybody loses. Santa was always a hero of mine; proof that magic existed if you only believe. I know that sounds sappy, but that same magic has created many cherished characters throughout history: the Easter Bunny, the Tooth Fairy, and even lesser knowns like the Great Pumpkin… I see you Peanuts fans. I see you… Anyway, I decided to paint a picture with Santa as the hero of a horror story for once. I put him up against demented versions of his friendly elves, a species of demonic creatures I call the Naughty.

One thing was clear after the publication of The Naught List; readers wanted to know more about my version of Santa Claus. They wanted to spend more time in his world. Because of them, I expanded the concept and created a rich backstory that was inspired by the beloved fat man’s real-life roots. I even delved into my own cosmic-horror universe and referenced entities from my novels Cruelty, Dastardly Bastard, and the upcoming The Sound of Broken Ribs.

Spoiler Alert: All of my books tie-in together in some way. Nothing overt, but Easter-egg hunters should have fun in my universe.

Overall, I think I accomplished what I set out to do, which was to create a badass version of Old Saint Nick—a giver of gifts that takes no shit. Especially not from those who would see him and Christmas destroyed. And, no, there is no religious ideology in these stories. The War on Christmas title is literal, not figurative. Santa’s here to kick ass and chew bubble gum, and… well, you know the rest.

So what are you waiting for? The series finale is free at this very moment, and the omnibus will be free for the five days leading up to and into Christmas, so grab them while they’re live. Because once Christmas is over, they go back into the vault until next Christmas.

I would like to extend my sincerest gratitude to anyone who has ever read my work. Thank you so very much. From my house to yours, Happy Holidays!

One final note, and I promise I’ll leave you alone. If you enjoy the War on Christmas series and would like to try more from my back catalog, I’ve made all of my books $0.99 until January 1, 2017. Six novels, three collections, and numerous short stories, all for a buck each.

Thanks for having me, Adrian!